Leave a comment Posted by Nikki- Your Last Mouthful on December 21, 2012

Readers of my blog will know that I love Emma Jane’s Cupcake Kitchen. Aside from the fabulous cupcakes, the decor is quirky and cute, it’s a cosy spot to meet friends and the lovely Emma Jane herself makes you feel welcome and valued. 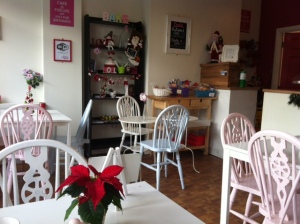 If you love cupcakes, this is the obvious place to come for orders and to enjoy some cake in a gorgeous setting. However, it probably isn’t the first place you would think to come for Afternoon Tea. There are plenty of places in Cardiff offering Afternoon Tea and they all have their specialisms. Some are known for their tea, some for their bubbly and some have an envirnoment that screams out to be serving afternoon tea. Well, Emma Jane has the cake!

I’ve been to some perfectly nice Afternoon Teas where everything has been lovely but the cakes aren’t always homemade and for me this is pretty much essential. With Emma Jane’s Christmas Afternoon Tea, we got two cupcakes, delcious mince pies and gingerbread, all homemade.

When we arrived everything was prepared for us and we were asked to choose our cupcakes and our choice of tea. We chose a spicy Chrsitmas tea, a Gingerbread Cupcake and a Cranberry and Orange Cupcake. These were brought to us on a pretty three tier cake stand (also essential in my opinion).

The sandwich selection was excellent. No boring choices here. We enjoyed cranberry and brie, turkey and stuffing, ham and pickle, and cucumber. The sandwiches had their crusts removed in the traditional manner but they were packed full of filling.

We polished off the sandwiches in no time and moved onto the middle tier; mince pies and cream and gingerbread. The mince pies were warm and delicious. We had a huge pot of cream and we managed to eat it all, finishing it off by dipping our gingerbread in it which were also very good.

Lastly, it was the turn of the top tier; the cupcakes and chocolates. We were told that if we couldn’t eat everything we could take it away in a box but we powered on. The cakes were very good as I would expect based on Emma’s other cakes. I especially enjoyed the gingerbread cake.

A lot of effort went into this Afternoon Tea. Everything was homemade and it was all served at the bargain prize of £8.50. If you love cake and you love afternoon tea, Emma Jane’s Cupcake Kitchen is your answer. If you’re not interested in Afternoon Tea then definitely pop in for a cake.

Leave a comment Posted by Nikki- Your Last Mouthful on September 16, 2012

Monday 17th September until Sunday 23rd September is National Cupcake Week!  To celebrate Emma Jane’s Cupcake Kitchen have gone all out with a Willy Wonka inspired ‘Emma Jane and the Cupcake Factory’ theme. To get the week off to a good start, they will be open on the Monday 10am – 6pm as well as their usual opening hours. There will be free samples and all flavours will be the Cupcake of the day (Only £1.50 each!)

Everlasting Gobstopper is a blue bubblegum flavoured sponge and pink bubblegum frosting topped with a mini gobstopper! (Not suitable for small children)

Fizzy lifting Cola is a cola flavoured cupcake, both sponge and frosting, and is decorated with popping candy and fizzy cola bottle

Best of all, there will be a Golden Ticket Raffle each day. Every customer that makes a purchase will be given a raffle ticket and entered into our free prize draw. The draw will be held every evening and the lucky winner will get a Box of 6 cupcakes!

Leave a comment Posted by Nikki- Your Last Mouthful on January 23, 2012

I’d heard a few rumours about some good things happening in Emma Jane’s Cupcake Kitchen so when she opened up her premises on Crwys Road last October, I observed with interest and I was very pleased to be invited down to try what was on offer.

I’ve driven past Emma Jane’s Cupcake Kitchen on many occasions and the first thing I noticed other than the eye catching shop banner was the window display. Just in time for valentines day, Emma has some examples of where her talent lies. Beautiful cupcake bouquets and heart shaped displays.

I’d chosen a quiet day to visit but when I entered both Emma and her husband Lee appeared at the counter and happily chatted about the cakes on offer, talking me through the flavours available and telling me that they changed daily. Emma designs her cakes and makes up the recipes herself and she has quite a collection! I chose a coconut and raspberry cake and a gingerbread latte and headed to the window seat at the front of the shop.

I am quite excited about this place because it’s right up my street! It’s beautifully decorated with clean white walls and laminate flooring which is a great backdrop to all the quirky cake related decorations, canvasses on the walls and cute cushions. The tables are white and vintage chairs are painted baby blue and baby pink. The fuschia wall behind the counter adds some colour and creates a nice contrast to the white.

For me, atmosphere and decoration are very important and Emma Jane’s Cupcake Kitchen is simply lovely. If I had my way, it’s probably how my kitchen would look. I think that it could be easy to get the decor of a cupcake shop very wrong but they have got it spot on in my opinion.  Music was playing at a nice level and they have free wi-fi. It’s the kind of place I could happily sit for hours with my lap top writing up my reviews, except I would probably get very distracted because Emma and Lee were just so lovely to talk to. Emma wasn’t going to add the addition of a seating area, just a shop for orders originally but I’m glad she changed her mind.

There are lots of cupcake makers around and they really do vary in quality but I’m happy to say that these cakes were very good indeed! At £2 per cake, they are a good size. There is always a ‘cupcake of the day’ which is priced at £1.50 and you can get a box of 6 for £10! I tried 5 of the cakes on offer (not all at once…I took some home with me!) and here is my verdict.

I thought this was quiet an unusual flavour for a cupcake so I thought I’d give it a try. Like all the cakes, the sponge was moist and the icing was soft and creamy. It was decorated with a real blueberry and a lemon slice sweet. It was very nice but for me, I would have liked to have tasted a bit more blueberry as it was a very subtle flavour against the lemon. 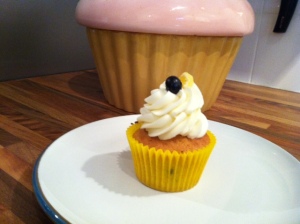 Wow! This tasted exactly like a cherry bakewell. The moist almond sponge had jam running through it and was topped with an almond flavour icing and decorated with almond flakes and a cherry. Ingenious!

Emma has a chocolate cupcake on offer every day and has a gluten free offering on a Wednesday and a Saturday. I was keen to try the gluten free cake and Lee suggested I try a non gluten free one too to see if I could tell the difference. Although I’ve had some very nice gluten free cakes, they often have a powdery texture that is common in a lot of baked gluten free products but I have to say, it was very difficult to tell these two apart. When we tried each cake without the icing, there was a difference but it was so minimal that with a bite including the icing, it was very difficult to tell and had I not been told that one was gluten free, I would never have known.

Emma is clearly very creative with both her designs and her flavours. She takes orders for weddings, birthdays and events and makes some lovely pieces included cupcake bouquets which were only £20 for a small one containing 9 cakes. I think these will be a great seller at valentines day especially.

Emma Jane’s Cupcake Kitchen has really appealed to me and I will definitely go back. With so many cupcake lovers and a good location, I think this place will do well. With a good selection of drinks and other sweet treats on offer alongside the cupcakes, I think it will appeal to a wider audience than if it was purely cupcakes. I am a fan!

My last mouthful was: The coconut and raspberry cupcake